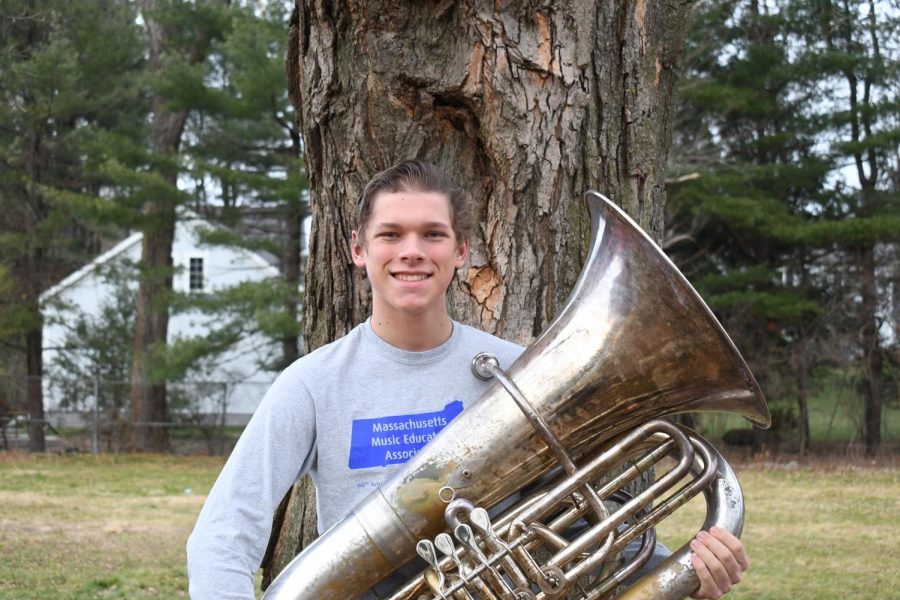 Making an All-National Honor Ensemble is one of the highest recognitions a high school musician can receive. Applicants undergo an audition process after entering the Massachusetts Music Educators Association (MMEA) District and All-State ensembles.

Sjodin submitted his virtual audition over the summer and received his acceptance after a school ensemble rehearsal.

“It was really nice for that period of time, but I already knew that the thing was going to be virtual,” Sjodin said.

In 5th grade, Sjodin began playing the euphonium, a brass wind instrument similar to the tuba. In 6th grade, he switched to the tuba, drawn to its loud, deep sounds.

“When you’re that little, all you really care about is playing loud. But, as I got more used to playing the instrument, I learned how it fits inside the ensemble,” Sjodin said. “As the tuba [player], I’m kind of the foundation of the whole house. Every instrument is important, but it felt like I had a place in a larger group.”

From then on, Sjodin took weekly private lessons with Jobey Wilson, who helped him hone his skills as a player, improve his sound quality, and rehearse music.

“Jobey Wilson is the nicest guy. He’s a complete miracle worker, and while I think that I could’ve done pretty well on my own, I do credit a lot of my performance towards him,” Sjodin said.

In addition, Sjodin engages with music outside of private lessons by playing with various ensembles. He currently plays with New England Conservatory’s Senior Massachusetts Youth Wind Ensemble and has played with the Rivers School Conservatory and a couple of smaller ensembles with Wilson in the past. At school, he plays in the Wind Ensemble and one of LHS’s jazz ensembles. In addition to playing the tuba, he is also proficient in playing the trombone and trumpet.

“Feedback [that you receive through auditions] is wonderful, and who knows, you might make it into nationals as well. Hopefully, that time, we’ll actually be traveling somewhere and getting to meet all those other wonderful musicians in person,” Sjodin said.